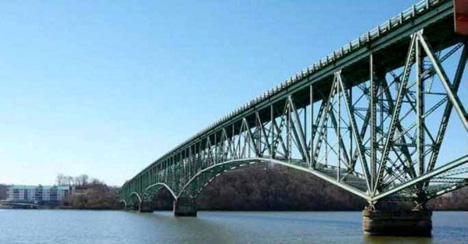 The Lake of the Ozarks is one of Missouri’s most prominent recreation and tourism destinations.

MO Route 5 is a main access road into this region. The route crosses the Osage arm of the lake via the Hurricane Deck Bridge, originally built in 1936 as a 2,200-ft-long steel deck truss structure with 463-ft spans supported on dredged caissons in up to 85 ft of water. In 2009, it was determined that the truss was structurally deficient (due to section loss in the gusset plates) and had reached the end its useful life, and the Missouri Department of Transportation (MoDOT) began making plans to replace it.

The project site presented several challenges, including significant right-of-way restrictions, rock-bluff constraints in the approach roadway and environmental concerns that included nearby Native American burial grounds. On top of that, the closure of the bridge for the duration of the reconstruction was deemed unacceptable by the local stakeholders due to the 42-mile detour.

Procurement Approach
Engineering consultant Parsons was selected to provide the preliminary and final design services for the baseline design concept for the bridge replacement. To encourage contractor innovation, MoDOT elected to employ an alternative technical concept (ATC) procurement method for the project. Under the ATC process, contractors were invited to develop alternatives to, or modifications of, the baseline design with the intent of reducing costs without sacrificing MoDOT’s defined project objectives.

Two contractors submitted ATCs that represented significant departures from the baseline concept. The extensive nature of these two ATCs rendered the design cost, schedule duration and required resources prohibitive to performing a complete final design before the bid opening. Considering this limitation, these two contractors collaborated with MoDOT and Parsons to develop a conceptual design focused on defining the variables most crucial to the development of a detailed cost estimate and bid price for the project. Ultimately, these two ATC designs were advanced to only 30% completion before bid submittal, and pre-bid engineering deliverables were minimized. Contractors proposing ATCs that were significantly different from the baseline concept bid the project based on preliminary design quantities developed by Parsons, with quantity growth over 2% being the contractor’s risk.

In a nine-month period, Parsons mobilized four teams of designers, including one to perform preliminary design and prepare bid documents for the baseline approach and three to prepare bid packages for the confidential ATCs proposed by the contractors. These design teams were staffed from different offices, and administrative firewalls were designed to ensure complete confidentiality throughout the bid document preparation process.

The triangular-shaped delta frame, extending from the pier cap up to the bridge girders, was proposed for this project due to its ability to support long spans at a significant height with few piers. With the use of the delta frame, original bearing elevations were maintained, thus minimizing any necessary retrofit to the existing substructure.

The delta frame has a typical span of 462 ft, 10 in., matching the existing deck truss spans. Three delta frame girders spaced at 13 ft, 2 in. were used to support the 40-ft, 8-in. roadway cross section, which consists of one 12-ft lane in each direction with 5-ft shoulders and MoDOT Type B Safety Barrier Curbs supported on a 9.5-in. concrete deck cast on stay-in-place steel forms. The delta frame welded plate girders were 130 in. deep and the frame legs had a typical depth of 48 in. All structural steel was designed to be unpainted ASTM A709 Grade 50W weathering steel.

ATC Design
General Contractor American Bridge Company’s ATC involved a total redesign of the baseline concept with a new permanent structure on a new parallel alignment, leaving just 2 ft between the new structure and the old structure. The new structure comprises two plate girder units with six typical spans of 265 ft, 210-ft end spans and an in-span hinge connecting the two units. The steel superstructure is founded on twin 8.5-ft diameter, steel-cased drilled shafts. An 8-ft barbell strut that sits between the drilled shaft and the 8-ft-diameter column ties the columns together.

The slender substructures are up to 120 ft tall and are braced against sway by the steel superstructure. Instead of proposing a three-girder bridge, as in the baseline design, a four-girder, unpainted ASTM 50W steel bridge with 93-in. web depth was used, reducing deck thickness (8.5 in.), reinforcement, forming and future replacement expenses.

Demolition on the existing bridge began this past December and was expected to be completed in March, at the time of publication. The new bridge, which uses approximately 2,100 tons of structural steel, opened to traffic on September 9, 2013, three months ahead of schedule.

This project was featured in Session B6 at the World Steel Bridge Symposium in Toronto in March. Go to www.aisc.org/nascc to view the presentation.