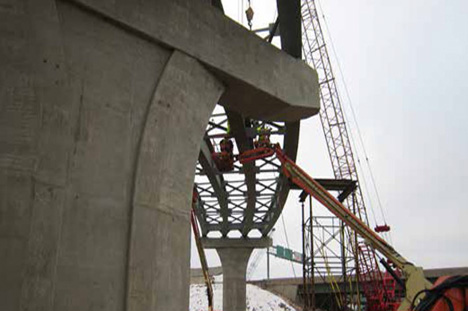 For Twin Cities drivers, navigating the intersection of TH169 and I-494 meant traveling through three sets of traffic signals in short succession and dealing with frequent bottlenecks. (TH169 is a U.S. Highway; “TH” stands for “Trunk Highway.”) In addition to delays, the congestion in the interchange often resulted in traffic accidents.

Improvements to this interchange had been in the planning stage for many years, but lack of funding held up the project. In 2009, however, the Minnesota Department of Transportation (MnDOT) obtained approval from the FHWA to use performance-based design to improve the interchange. This allowed MnDOT to limit the scope of the project to provide the traffic movements needed at the time of construction, which reduced the projected cost by as much as $40 million; the final cost was $128 million. The resulting project eliminated at-grade crossings and included construction of six of the eight system-to-system interchange ramps, which used 2,500 tons of structural steel in all. Preliminary plans were required for the two remaining ramps to ensure that there will be adequate space to construct them in the future if and when they are warranted.

MnDOT elected to use the design-build project delivery system to complete the project, which is located within the municipalities of Bloomington, Edina and Eden Prairie, Minn. The final design and construction of the project was awarded to the team lead by a joint venture of C. S. McCrossan/Edward Kraemer & Sons (CSM/EKS). Jacobs was the lead designer with TKDA playing a significant design role as well. The solution provided by the CSM/EKS team included 12 new or widened bridges, six roundabouts, 11,000 ft of retaining wall and seven noise/visual barrier walls. The plan maintained continuous access for through and local traffic during construction.

Curved steel plate girder superstructures were chosen for the three flyover ramps, which are elevated for a significant portion of their length. The use of structural steel was critical to meet the geometric requirements for these ramps, which feature tight radii, skewed substructures and spans of longer than 200 ft. The preliminary design of the two future flyover ramps used curved steel plate girders as well.

A four-girder cross section was used to support the 35-ft, 4-in.-wide deck. Because of the sharp curve, most of the bridge is in full superelevation with a 5.8% cross slope. Each girder has a constant depth web along its length, but the webs of the four girders vary in depth across the section from 61 in. at the inside girder to 73 in. at the outside girder. This configuration had geometric, structural, aesthetic and economic benefits. By making the low-side girders shallower, the structural depth was reduced 12 in.; this provided more vertical clearance to the roadways below. The bottoms of the girders were at similar elevations, which eliminated the need for large steps in the pier caps, and the visual quality of the bridge was improved by giving it a more balanced and less tilted look. The most tangible benefit was the reduction in steel quantity realized by using a more efficient depth for each girder.

The Ramp B bridge crosses over six through lanes of I-494, four lanes of TH169 and three lanes of Washington Avenue. Required horizontal clearances to the roadways below dictated that several of the piers be skewed. The largest skew is at Pier 5 and is greater than 54°. Two spans away, the north abutment has no skew. Pier 6, which is between the two, was set at a skew of about half that of Pier 5 to mitigate the effects of the drastic change in skew.

At each bearing, a line of radial cross frames was provided. However, at the highly skewed Pier 5 the cross-frames tended to act as a lever such that live loads on the inside girders caused uplift at the bearing of the outside girder. The solution to this problem was to soften the structure by eliminating the cross-frame between the outside girder and the bearing location of the adjacent girder. The resulting spacing was less than the 30-ft maximum AASHTO requirement for cross frame spacing in curved girders, which made it a viable solution.

The combination of the large spans and skewed piers of the Ramp B bridge made the bearing design difficult. AASHTO Method A was initially used for the elastomeric bearing design, but at some locations there was no solution that could meet all of the requirements. Pot bearings were investigated but it was deemed that the lead time required for their fabrication would adversely impact the schedule. Approval was obtained from MnDOT to design elastomeric bearings using AASHTO Method B. Compared to Method A, Method B provides for increased bearing resistance in exchange for increased testing of the bearing components and the fabricated bearings. The elastomeric bearings designed by Method B met the requirements and were used in the bridge.

Anti-Icing System
The Ramp B bridge and Ramp K bridge (from westbound I-494 to northbound TH169) were among the first bridges in Minnesota to be constructed with a built-in anti-icing system. The system was required to apply anti-icing chemicals at rates of 5 to 87 gallons per lane-mile to the roadway at temperatures as low as -22 °F. Sprayer heads were located in the bridge deck and longitudinally spaced along the roadway alignment at 50-ft maximum spacing.

Each sprayer is connected to a watertight stainless steel valve box placed in the barrier rail. Several safety considerations went into the barrier details. The deflection joints in the barriers were shifted away from the junction box locations, and additional reinforcing steel was placed adjacent to and around the boxes to aid in the resistance to vehicular impact. The access plates are set flush with the face of the barrier and have countersunk bolts to prevent vehicles from snagging on the boxes.

The project was finished on schedule, with substantial completion in November 2012 and final completion in June 2013. By all accounts the public is very happy with the completed project, as the system-to system movements that characterize the new interchange are much faster and safer than the previous at-grade crossings.